This version was used on BuNos 145307 through 145317, or the F4H-1s that had the straight canopies.  There were two panels (panel 19 and panel 20) mounted with a lot of screws (panel 19 had no less than 72 screws used to mount it), no hinges found here.  The ADF antenna was a large rectangular-ish shape.

As this area became necessary for added electronic equipment the area underwent a transformation.  Gone were the multitude of screws, being replaced with much fewer (49) Airlock Fasteners (according to the F-4B/J Plane Captains handbook). With the addition of a hinge, the panel became a door.  The door was split into three sections connected with hinges (I would imagine this was so equipment could be accessed without opening the entire door?) This version was first seen on F-4As  146820 through 148254 and then reappeared on the production F-4Bs starting with BuNo. 148363.  At some point, this door was dropped in favor of Variation 4 which was first used in the Navy on the RF-4Bs. Looking at the Plane Captains handbook, it seems to indicate that this was used on all F-4B/Ns with the change coming with the F-4J.

With the introduction of the RF-4Bs, (well, actually the USAF Versions but they used Variation 5) the door underwent another transformation.  Gone were the hinges and the door became one single door.  (Don't know when the non-RF models converted over to this variation.)  Also, the Plane Captains book indicates a change to (49) Quick Release Fasteners (also called barrel nuts) for the RF-4B, but still indicates Airlock Fasteners for the F-4J. But in an early F-4C handbook they are referred to as Airlocks as well so I wonder if it was just a difference in the identification and that they were never Airlock Fasteners and always the barrel nuts?

Ok, not much of a variation, but this was used on the USAF F-4s.  The main change is the signal light was moved from the spine to this door to make way for the inflight refueling receptacle. I have drawn the IFF antenna larger because the photos I have seem to indicate that the USAF used a larger antenna, but I could be wrong. The Air Force used 43 Quick Release Fasteners (barrel nuts) to secure the door.

This variation found on USAF F-4Es includes the SST-181X rendezvous beacon on a round mounting plate just to the right of the IFF antenna.
NOTE: The SST-181X Rendevous  Beacon was part of the Project Sky Spot equipment installed in aircraft during the War in Vietnam. After the war, most of these beacons were removed and cover plates were installed in their place.

This variation again found on USAF F-4Es has the SST-181X rendezvous beacon mounted on a tear-drop mounting plate.

This variation was found on some F-4C and F-4D aircraft during the War in Vietnam.  The SST-181X rendezvous beacon was installed aft of the signal light and before the hinge on the centerline of the door.  (I have seen one exception, F-4C 63-7581 which appears to use variation 5a, but the picture I have is poor and it may be another antenna entirely.)

This variation was found on USAF RF-4Cs.  For some reason, the IFF antenna and the signal light were both moved aft on the door.


Where do we go from here? Well, there are still some more different antenna mountings on the door which need a bit more research.  But I do plan on updating this page as I understand the additional variations better.

Recently a discussion on The F-4 Phantom II Group on Facebook caught my attention and I thought I would take the opportunity to outline the differences between the Navy and Air Force inboard pylons on the F-4.

First, we need to understand that the pylons used were originally designed for different purposes.

The Navy versions of the F-4, as well as both Navy and Air Force RF-4s (and some early F-4Cs), utilize the LAU-17/A as their inboard pylon.  As the nomenclature suggests, its primary purpose is as a launcher not as a weapons pylon


The LAU-17/A was designed to carry and launch an AIM-7 Sparrow III missile so that the F-4 could carry a total of 6 (4 on fuselage semi-submerged stations and one on each inboard pylons).


When the AIM-7 wasn't carried, the inboard pylon could also be fitted with a launcher rail on each side to carry and launch the AIM-9 Sidewinder missile. The AERO-3/A/B allowed the LAU-17/A pylon to carry an AIM-9B missile only.  The LAU-7/A launcher rail allowed the LAU-17/A pylon to carry either the AIM-9B, AIM-9D, and subsequent Sidewinder missile. The launcher rail consists of a power supply for the electrical requirements of the missile, a mechanism which retains the missile during flight and releases the missile when fired, a nitrogen receiver assembly to provide coolant for the missile seeker head, and safety elements to keep the missile from accidentally firing during loading/unloading and during catapult launch and arrestment. (Note: Don't confuse the LAU-7/A launcher rail with the AERO-7A which was the launcher for the AIM-7 on the semi-recessed fuselage stations).

As the F-4 began to perform air-to-ground missions an adapter was fitted to the inboard LAU-17/A pylons to allow the carriage of air-to-ground weapons.
From this adapter, a wide variety of single weapons could be hung.  To carry more than one weapon on each pylon a TER (Triple Ejector Rack) could be installed  so that three weapons could be attached (up to 750lb. each.) Someone asked if the F-4 could carry a MER (Multiple Ejector Rack) on the inboard pylons. The answer is "No," MERs could only be carried on the centerline or outboard stations.

When the adapter was fitted, the pylon cold also carry sidewinder rails as well.

The Air Force inboard pylon was sometimes called the MAU-12 pylon which refers to the Ejector Rack which was in the pylon.
The ejector rack allowed the carriage of a single bomb, missile launcher or other weapons on the pylon. This pylon does not support the AIM-7 Sparrow III missile. But much like the Navy's LAU-17/A it could be fitted with a pair of AERO-3/B or LAU-7/A missile rails for the AIM-9 Sidewinder.
The AIM-4D was used in combat in South-East Asia by some F-4D Phantoms, which were equipped with special LAU-42/A launchers for this purpose. However, it became soon apparent that the AIM-4D was ill-suited for the close-range dogfights encountered over Vietnam, and only 5 kills were achieved with the Falcon. The main problem of the missile was seeker cooling. The limited amount of onboard nitrogen coolant meant that the seeker could not be pre-cooled for any length of time, which in turn meant that it had to be cooled more or less shortly before firing, i.e. when close-range combat had already started. This cooling, however, took up to 5 seconds which is like an eternity in a dogfight, so that most targets were out of reach again when the missile was finally ready. Moreover, when the coolant was exhausted after several aborted launches, the Falcon was just useless dead weight, which had to be brought back to base for servicing. Another problem of the Falcon was the lack of a proximity fuze, which made it effectively a hit-to-kill missile. The AIM-4D was gradually withdrawn from use beginning in 1969, and by 1973, the AIM-4D was no longer operational with the USAF.


To carry more than one weapon on this inboard station a TER could be installed which increased the load to 3 weapons of 750 lb. each.  Several other adapter rails could be installed for different missiles as well.
As with the Navy's LAU-17/A, the Air Force could also install AERO-3/B Sidewinder rails on the pylon with some of the air-to-ground weapons installed.  Unlike the LAU-17/A the Air Force inner pylon could not be jettisoned.


For an interesting take on a modification of the Air Force inboard pylon found on Israeli and Turkish F-4s for carrying the Popeye missile see this post:  https://phantomphacts.blogspot.com/2013/10/israeli-mods-to-f-4-pylons.html

Ok, I have been working on my new (version 15) master drawings for the F-4 Phantom.  I have chosen to start from the beginning with the F4H-1. When I do master drawings, I do a lot of research, looking at pictures, and so forth. I lay out a grid with the Fuselage Stations, the Butt lines, and the Water lines.  I begin by gathering all the measurements I can, station number references, and any other information that will put a particular part at a particular location.  I then start by laying out the "skeleton" of the aircraft, locating as many ribs and spars as I can (this usually gives a good reference to where panels and joints occur.  In fact, I probably spend just as much (or even more) time researching and looking for answers as physically drawing.  I try to make everything as accurate as possible.

You can see in this drawing that first of all, it has an inset leading edge light. Next, the trailing edge light is smaller and recessed.  Information in NAVWEPS 01-245FDA-3-1 seems to support this.  Finding photographic evidence is much harder.  I think I see it, but most pictures are taken from so far away that when you blow it up to get better detail, well, you just can't be sure. 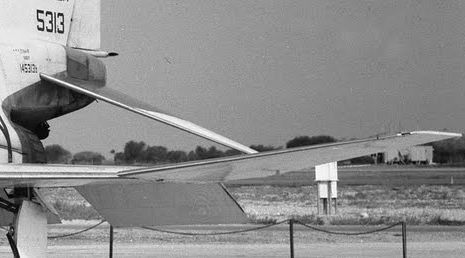 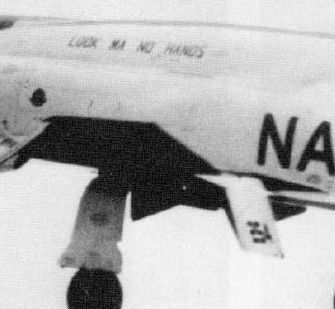 Here is a picture of 148254 (the 26th airframe) still sporting the old wingtip. Not as nice a picture, but it clearly shows a very clean wingtip. 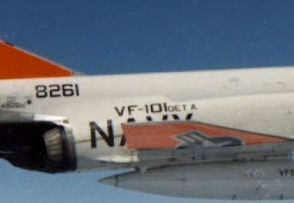 This is a picture of 148261 (the 33rd airframe) with what seems to be the original wingtip.

2. The second variation was installed on 148375 through 151021 and any aircraft that had ASC 40 and 41 take place. (Butch Heilig mentioned this in an email to me, and after research, I see that the original F-4Cs would have had this configuration as well. Thanks, Butch!)
Here is my illustration of this variation:

This version has the more traditional trailing edge light.  NAVWEPS 01-245FDA-3-1 indicates that these aircraft still had the early leading edge light. 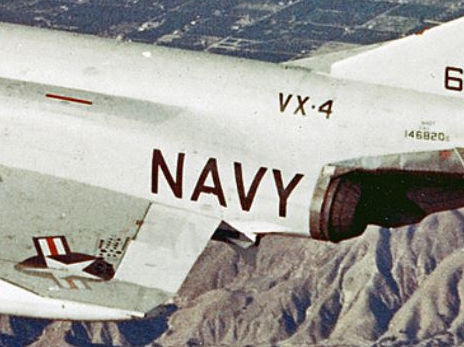 This is a picture of 146820 (22nd airframe) with what seems to be the mod with still the old style leading edge light.  See what I mean by pictures not showing very much detail?

One of the things that make this change odd, is that it took place mid-block, rather than starting a whole new block with the change.  148375 was the 13th aircraft in block 6, there were 9 more to be constructed in that block.

3. The third variation is what eventually became the production version. OK, now the 1 million dollar question.  When was the "bug eye" leading edge light introduced?  I don't have the foggiest, but it seems to be somewhere around 1964. I see pictures of the F4H-1 airframes later in life with the "whole package" of newer wingtip lights.

The "bug eye" leading edge nav light clearly would have better side visibility.  Don't know if this was the only reason for the change.  But you can see pictures of it scattered throughout the F4H-1s, most often later in their careers. 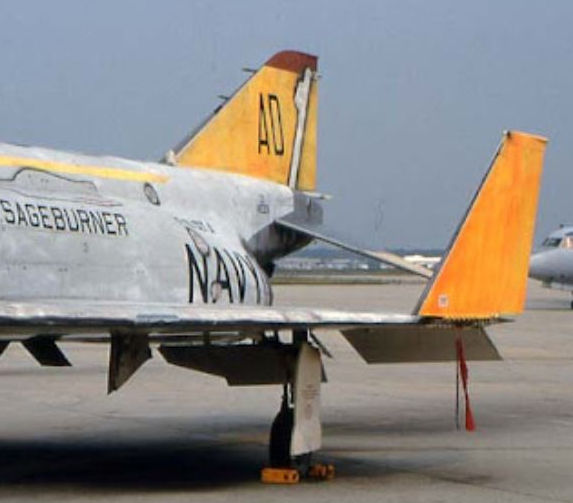 This picture of 145307 (first Block 2 aircraft, the 8th airframe) shows later in life it had the production wingtip retrofit. 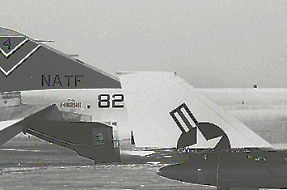 Of course, this post probably brings up more questions than it answers.  If you have any answers, I would love to hear from you so this change can be fully documented.