After sharing a copy of my latest drawings with a few selected friends, I was told that the intake profile and splitter plates looked wrong.  They were kind enough to share a few pictures and sure enough, I missed the mark.  So I took the opportunity to research the situation a bit more and redesign my drawings (this time digitizing the contours directly from the pictures).

Here is the result of my research (ignore the paint job, they are all on the same master aircraft drawing): 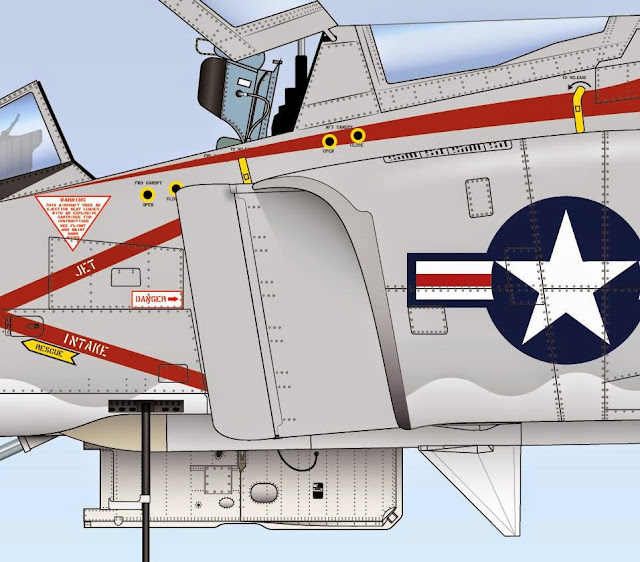 As seen on BuNo. 143389a - pass through holes added to variable ramp section: 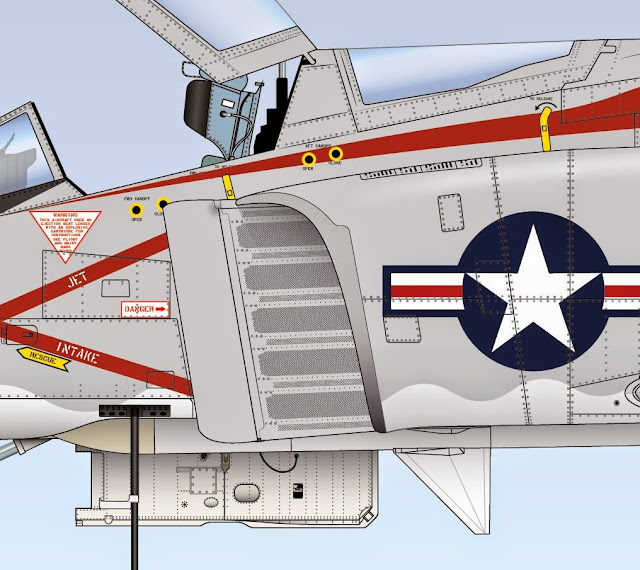 As seen on BuNo. 142260a - Intake was cut back and lower discharge chute added (upper scab was primarily to make up height difference between old variable ramp and new intake profile, but also may have served as a discharge chute): 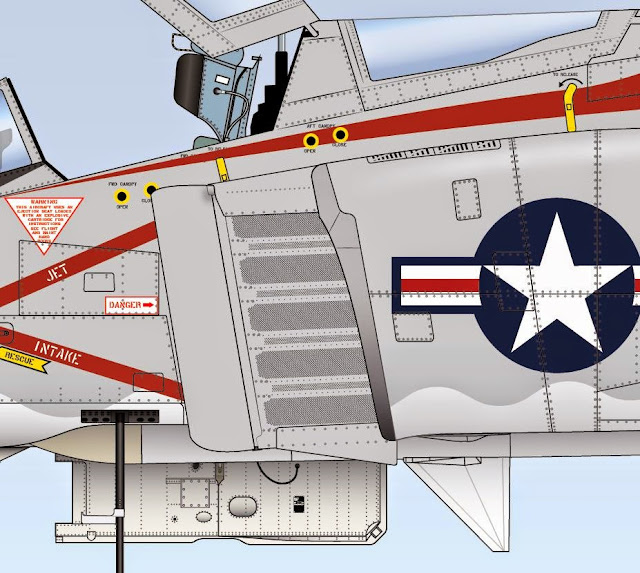 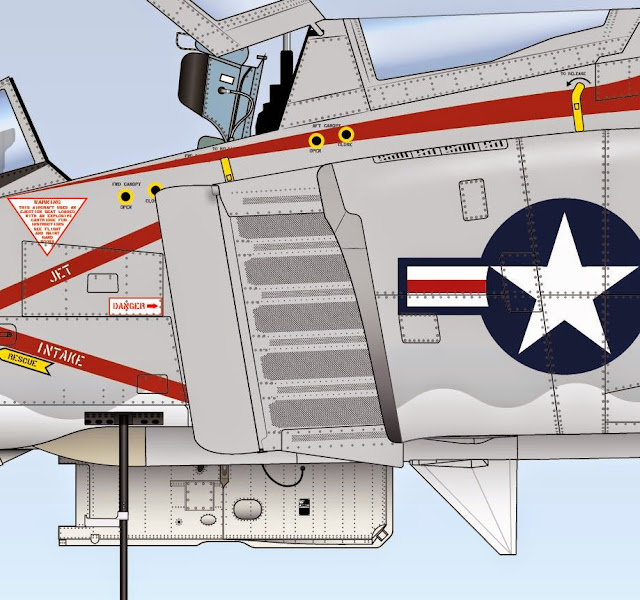 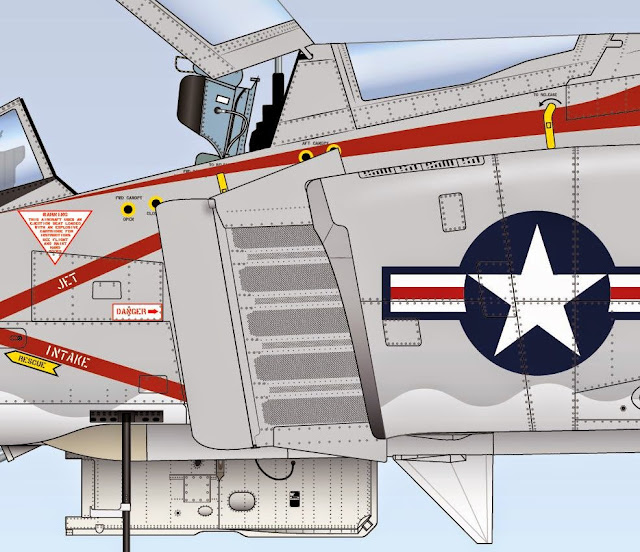 As seen on BuNo. 145307b - Holes added to expanded upper discharge chute: 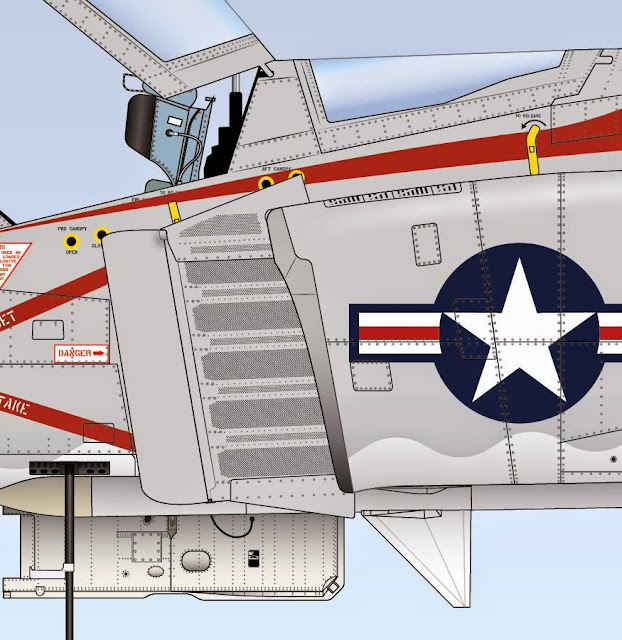 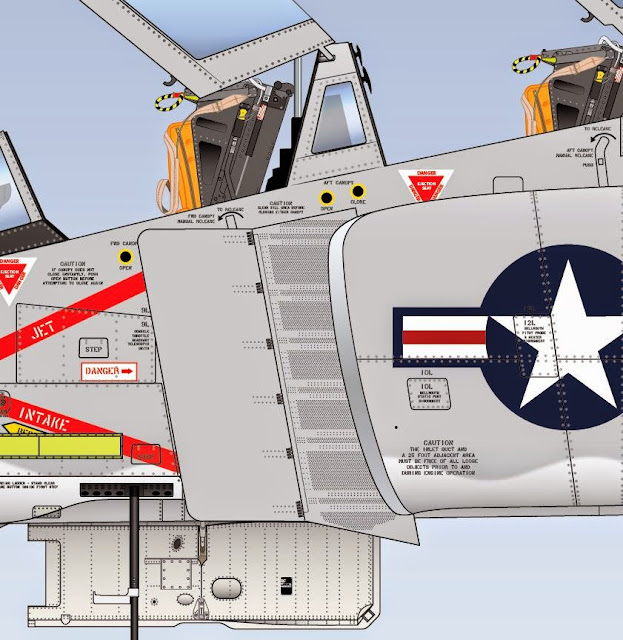 All You Ever Wanted To Know About The J79 Turbojet Engine

YouTubes made by AgentJayZ of S&S Turbines about the J-79 engine. I find them a wealth of information and good clean fun. Just click on the titles to watch the videos.  This guy has a dream job! I miss the smell of burned JP-4.

Email ThisBlogThis!Share to TwitterShare to FacebookShare to Pinterest
Labels: INFO

Differences between the Phantom FG.1 and FGR.2

The model F-4M (FGR.2) was an adaptation of the F-4J and F-4K (FG.1) aircraft.  The structure forward of FS 77 is based on the F-4J with the remainder of the aircraft the same as the F-4K (FG.1) with a few exceptions. These exceptions include:


The structural changes would include local beef up for the installation of strike cameras, removal of the pressure activated flooding doors for the foward and aft cockpits, modification of center fuselage bulkheads to provide for cooling air and new wiring harnesses to the enlarged aft equipment bay, and changes to the location of the stabilator feel trim equipment to allow for the enlarged aft equipment bay.

Email ThisBlogThis!Share to TwitterShare to FacebookShare to Pinterest
Labels: RAF

Ok, let’s try this again.  After much research and a heap of help from Mike France and Craig Kaston, I think I can present a better picture of the sequence of EW fits to the Navy Aircraft.   I will be presenting these in several parts, so keep coming back to see what has been posted. If you are new to this subject or these posts, I suggest you start by reading the first section so you get some background.

Just click on the links to read more about each system. 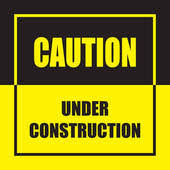 My Experience with the F-4 Phantom

My experience with the F-4 Phantom II began in 1975 as a newbie airman - a fresh honor graduate of the USAF aircraft maintenance program at Sheppard AFB, Wichita Falls, Texas.  My first assignment was to the 81st Tactical Fighter Wing  based at RAF Bentwaters / Woodbridge near Ipswich, England.  Bentwaters / Woodbridge was a twin base which were located just a few miles from each other, with Bentwaters being the main base with all the administration functions as well as the 91st and 92nd Tactical Fighter Squadrons, and Woodbridge having the 78th tactical fighter squadron and the 67th Air Rescue and Recovery Squadron operating the HC-130H Hercules and HH-53 helicopters. 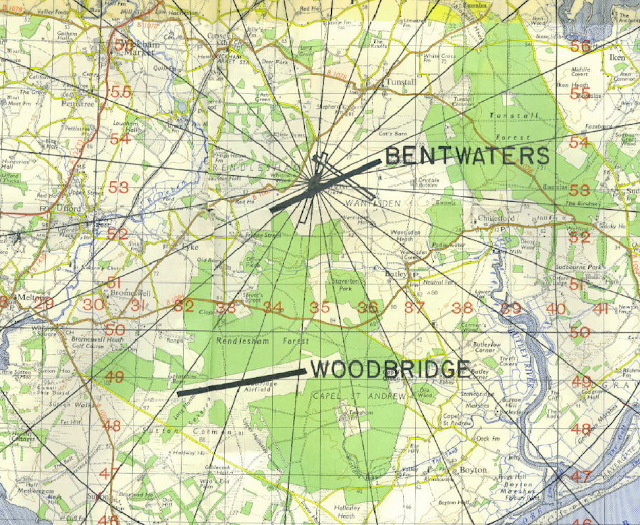 When I arrived in the UK I was assigned to RAF Woodbridge and the 78th "Bushmasters."  RAF Woodbridge was a very small and quiet base carved out from the Rendlesham Forest which surrounded it.  In 1943 when the base was constructed to be an emergency airstrip for returning damaged B-17s, over a million trees were cut down to make room for the base. 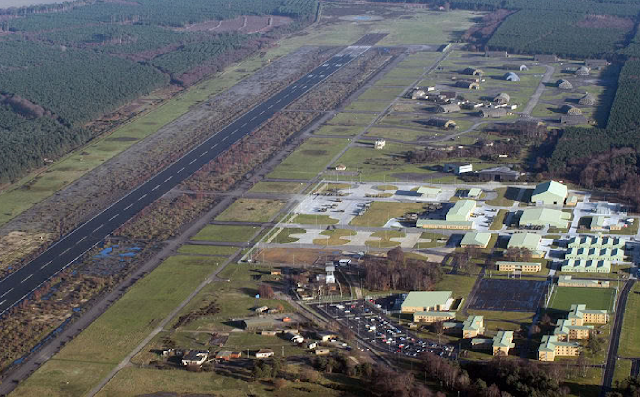 When I arrived at the flight line for the first time and walked up to the F-4D I remember how awed I was with this huge, powerful, ugly beast. I was placed into the capable hands of SSgt. Dennis Thompson to serve as his lackey until he figured I wouldn't do anything dumb that would result in the destruction of the aircraft, himself, or myself - pretty much in that order (a newbie airman was easily replaceable).   Dennis had previous experience with the F-100, F-105, and F-106 before he came to work on the F-4 and was ready to tell me all about the advantages and disadvantages of working on the F-4 over the other aircraft.  Overall I received the impression that he liked working on the F-4 and he taught me a lot in our time together. During the first few months I was able to avoid the usual newbie hazing (Hey airman, go get me a bucket of prop wash, skyhooks, or 50 feet of flight line, etc.).  I had grown up around airplanes and was able to quickly see through all of the nonsense. 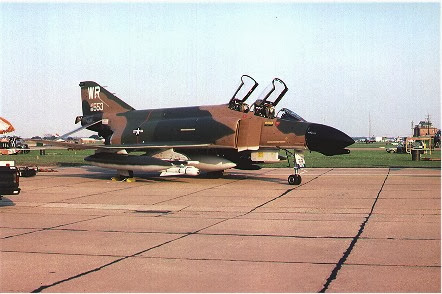 The 81st Tactical Fighter Wing had a responsibility to USAFE and NATO to provide a strike deterrent to keep the Reds from pouring through the Fulda Gap with thousands of tanks and troops. This was to be done by dropping tactical nuclear bombs on their heads.  In fact, both bases had fenced in alert areas which had aircraft loaded with B61 nuclear bombs, ready 24x7 to go into harm's way.
We had several exercises each year to prepare us for the day when the Russians would invade.  This started with a maintenance push to get the maximum number of aircraft ready and configured for the mission.  Then the planes were roped off, Security Police were stationed as pickets, and we then had to use the two-man concept (a huge pain in the er, bum) where everything you did required two people to make sure no one person could sabotage the weapon system (as it was referred to once it was mission ready).  Weapons personnel would come and load BDU-36 shapes (a kind of practice B61 filled with concrete to the right weight & balance) and any other defensive weapons that were tasked.  Now the weapon system was considered "cocked" (like you would a revolver). And we would sit and wait.  Once the weapon system was cocked we couldn't get near the aircraft unless one of three things happened.  1. The aircraft began pissing JP4 or other vital fluids all over the ramp, 2. The klaxon would go off and we had to launch the birds for a mission as configured (to the range to drop their loads of metal and cement), or 3. The all clear was given and we would begin to tear everything down, defuel and drop the extra external tanks, and get them ready for the day-to-day operations again. 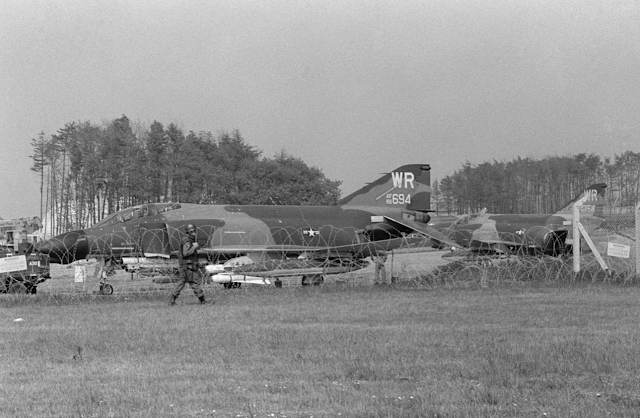 Our secondary mission for NATO was precision delivery of weapons, for which we used the AN/AVQ-23 Pave Spike pods with Paveway LGBs, and the AGM-65 Maverick missile.  Normally our weapons loadout really wasn't anywhere near what the F-4 was capable of.  Rarely were AIM-7 Sparrows loaded except on the alert birds. For normal day-to-day range work a single AIM-9 Sidewinder practice round was loaded (operational seeker head on an inert rocket motor) and one or two SUU-21 practice bomb dispensers.  On occasion, there was a SUU-23 gun loaded on the centerline station or an AGM-65 Maverick practice round loaded on the inboard pylon.  Once when I was TDY (temporary duty) at Zaragoza AFB, Spain, I was able to fly out to the range on my day off and watch the squadron drop bombs and strafe targets from the observation tower.  It was quite amazing to watch these birds swoop in at rather high speeds and still hit their target with bombs and bullets.

The Yom Kippur War in the middle east inspired our fearless leaders to wonder if the USAF could support the effort that was needed for the Israeli Air Force to repel borders and help turn the tide of the Syrian/Egyptian invasion.  This resulted in a series of "max-effort" exercises where we would fly around the clock for a week, turning aircraft around as quickly as possible and keeping them flying through extreme maintenance efforts.  We all hated these, and by the end of the week, we were tired, grumpy, and sick of it all.  Practice without the adrenalin that comes from actually being invaded kind of leaves you flat and the effort is exhausting.  I hate to think what these exercises cost in fuel and spare parts, as well as wear and tear on the already ten-year-old aircraft.  And of course, I don't think it did much to our public relations in the nearby hamlets and villages as our aircraft roared into the sky at all hours of the day and night (and believe me, the F-4D makes a ton of noise taking off in full burner).  One thing these exercises did do was forge teamwork among the maintenance people.  After one night flight, my plane (F-4D 65-0716) came back about 1:00AM with a hydraulic leak in the right-center leading edge flap.  This was in December and it was foggy and as cold as could be. After securing the plane and doing my post-flight inspections, I enlisted some help from some of the other crew chiefs to tear apart the flap, so that it was ready for the hydraulic troops when they arrived.  The next thing I knew our flight chief, Master Sargent Paul Day, was pulling up with his pickup truck.  He gets out in his immaculately clean and starched fatigues and starts relieving us one at a time so that we could sit in his warm truck and have a hot cup of coffee.  There he was turning a speed handle like a lowly airman again.  He stayed until the whole project was done and we were ready for the next day's flight. I am sure those fatigues were never the same after being soaked in hydraulic fluid, but that day I had a lesson in what true leadership really looked like.

Because the F-4D was my first aircraft, I assumed that all planes took this much maintenance to keep them flying.  Each day after the flight I would do a post flight inspection and have the necessary specialists show up to fix whatever needed fixing.  It is a true testament of the F-4 that it was such an effective weapons system for as long as it was.  At that time I called the F-4 a "vacuum tube jet flying in a transistor world".  And it kept on serving effectively into the era of integrated chips and digital electronics.  It was never the prettiest girl at the dance, and it wasn't the best at every task that was given it, but it was definitely the first true multirole fighter, and it could hold it's own doing just about anything asked of it.